The Led Zeppelin tribute bands I perform with

Read this: Zep! Live still in classic-rock orbit (3/16/2017)
A nice article about my love of this music, performing as JPJ, and ZepLive.

"Zeppelin Live" rocks the State (2/27/2011)
"Inside the concert hall, the band entered big hair, tight pants and all. From Robert Plant's flamboyancy, to Jimmy Page and John Paul Jones's serious attitudes, to John Bonham's intense energy, the band depicts a very convincing persona, incorporating accents and outfits and music. Eyes open or closed, they look and sound like the real thing... John Paul Jones's assumed character, Joel Pelletier, showed his versatility by playing bass, a killer piano riff during "All My Love" and mandolin during "Battle of Evermore." (read full review)

All the work put into performing as John Paul (Jones) Joel would not matter if I did not play with other great musicians who are also doing their parts as members of Led Zeppelin. Zeppelin live (formerly Heartbreaker) is a great band with dedicated musicians who have been at this Zep trib thing for almost 10 years (or more). Back in early/mid 2010 I was already deep into the Zep catalog on my iPod, soaking up all of their music in a serious way. In late June I decided I was reasy to find a Zep band and do this thing, so I searched the Internet for USA-based Zeppelin tributes, sending a message to each asking that IF they needed a JPJ to please contact me. During the search I ran across this band based out of the San Francisco Bay area, and sent them the same message. Immediatley after doing so I found a Craigslist ad from San Jose searching for a JPJ for a Zep tribute, and wondered if this could be them. A phone call later I had an audition, and my work cut out for me.

I spent the next month cramming bass parts, as well as putting together a keyboard rig, programming sounds, and working out the wiring and gear necessary to pull it off. I had not been a keyboard playing in a band since the early 80's, when I got tired of simply being "icing" on a cake, and sold my keys so I could stop the keyboard player requests (as a bassist, you are much more in the driver's seat rythmically and dynamically, and can really move the band along any way you choose). I was not particuarly worried about the audition - I REALLY WANTED the gig, and it would be pure joy preparing the material (and I could tell from Jeff, the lead singer and band leader, that they really had no other prospects at the time). I so over-prepared on the keys that Jeff still had concerns about my bass playing, something I had not heard from anyone in decades (as it turned out, it had more to do with the small amp I brought to the rehearsal). A duo rehearsal with the drummer and one more rehearsal/audition later, and the gig was officially mine.

The first few gigs I did in 2010 were wonderful, mostly flying gigs to large audiences, and they convinced me that compared to The Who (having come off 3.5 years as John Entwistle), Led Zeppelin was REALLY POPULAR, and audiences came out and responded WAY more that I had been used to. Next to possibly a Beatles tribute, I would rate Zep trib audiences as the most enthusiastic tribute fans out there, and the gigs and accomodations reflected this as well. But more than these reasons, I find this music way more interetsing, challenging and rewarding to learn and perform, and the music GROOVES in a way Pete Townshend's never did.

Zeppelin Live features: guitarist Stuart Horton, who plays all of Page's parts expertly, even layering effects to recreate some of the more sophisticated studio sounds that Page himself never bothered with when performing live; singer Jefery Larson, who is a formidible physical presence with incredible vocal chops, and a range that equals and exceeds Robert Plant when he was half Jeff's age; and the amazing JImmy Wells, providing the full-on Jimmy Wells Experience as John Bonham (go to ZepLive.com video page to experience his Moby Dick yourself).

Reactions to the band continue to be great - they have been established for almost 20 years, and their regular fan base in the SF Bay area have been very welcoming to me. They have toured across the United States and the Carribean, and we hope in the future to get more established in both casinos and some possible international touring. I am a full member of this band, and am commited to not only continuing to become a better JPJ, but to help continue this band's success. 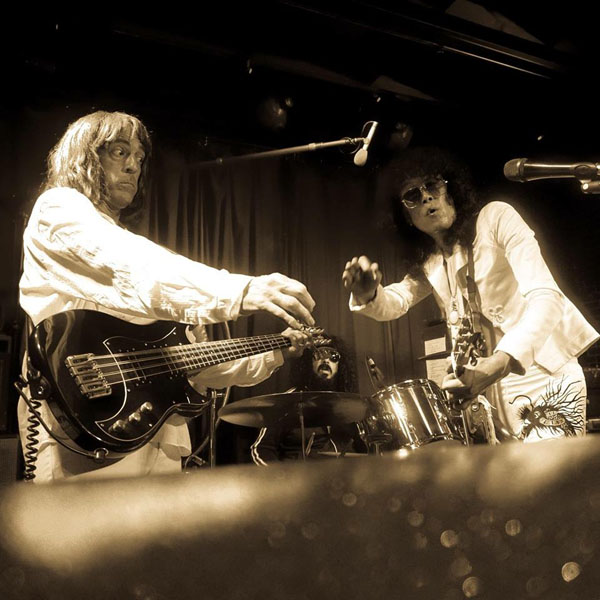 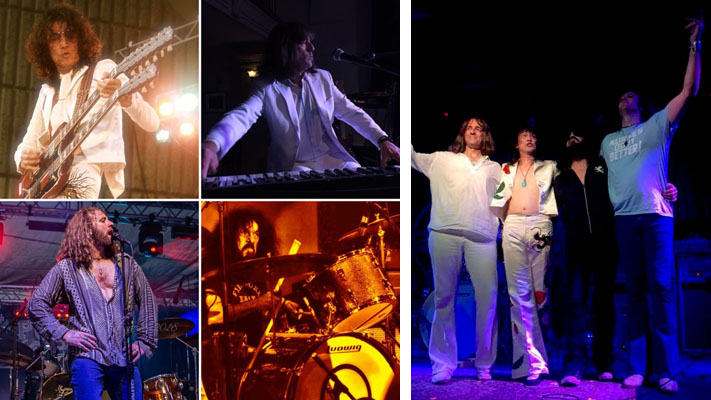 Mr. Jimmy (website: Mr. Jimmy Led Zeppelin Revival; Facebook: Mr. Jimmy Official) is as dedicated to "becoming Jimmy Page" as I have been to "becoming John Paul Jones," and it was about time we played together (we are "brothers" in so many ways). Our first performance in August 2018 was a wonderful experience for all involved, and there are more shows in 2019, including the famous Whisky A GoGo and SXSW and Aspen Film Festival showcases in support of a documentary film about him, directed by Peter Dowd. 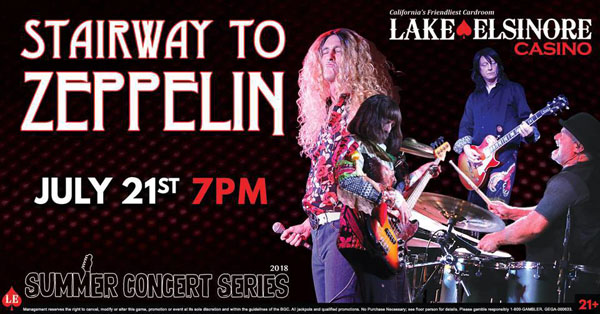 Stairway To Zeppelin SoCal is a newer (as of 2018) Zeppelin tribute out of Temecula, California. I've done 2 gigs with them in 2018, with upcoming 2019 gigs in Lake Elsinore, Temecula and the LA County Fair. 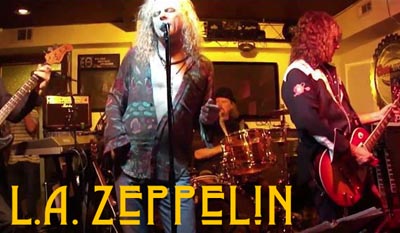 L.A. Zeppelin features seasoned Los Angeles pros based out of Lake Arrowhead, California (about 1.5 hours east of Los Angeles). These guys are great players, love the material, and have toured for years in both a CHICAGO and EAGLES tribute band, so I always welcome a call for gigs with them. 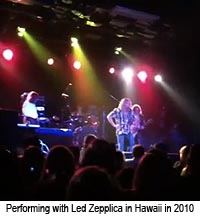 Led Zepplica, based out of Ventura, CA, has some very strong players, and was the Zep tribute I was most hoping to join in 2010, only to find out that they were looking for a JPJ in 2009 and had no idea I would have been interested. I had done a couple double bills with them while doing The Who, and loved the band (especially their drummer Darryl Johnson, who really puts across Bonzo's intensity, and has "the foot" that really identifies Bonzo's feel). By the time I was looking for a band to join, they had long since found their current JPJ, but have kept in touch and have invited me to fill in on a few gigs since. Their singer, Joe Retta, has an incredible voice and excellent Robert Plant stage manner (he also performs as Freddie Mercury in Queen Nation, and fronts The Sweet when they tour). Their guitarist Lenny Mann is a great guitarist, and an old pro in the tribute business (he also runs the website Tribute City).

Performing with Zepplica is very different from performing with Heartbreaker - Heartbreaker is very rehearsed, and focuses on the radio hits, with only some "live" versions of solos and arangements. Zepplica, much like the real Led Zeppelin, goes for it with little reahearsal (none with me to this date), and really goes for the live vibe and extended live arrangements. It requires a bit more homework on my part, but I enjoy the challenge of "flying without a net", playing many songs with them for the first time EVER. I look forward to future opportunities to play with them as a fill in JPJ, and hope to continue to please both the band and their audiences when I do. 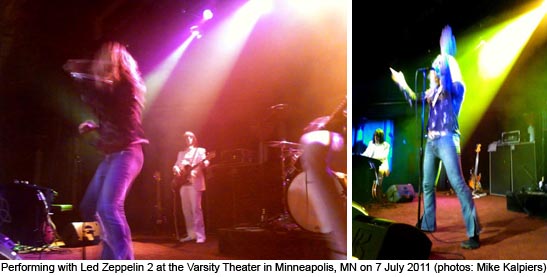 Chicago's Led Zeppelin 2 has performed off and on for over 10 years, but since 2009 have started touring the US once or twice a year. I got to play a few fill in shows with them in 2011-2012, including a group of shows in the Great Lakes area (including Wisconsin, Minnesota and Michigan) and a quick East Coast run including the Gramercy Theatre in NYC and The Paradise Rock Club in Boston. Great guys, very pro (check the Video and Songs page for live video with the band).

I welcome the challenge of being dropped into other Zep tributes as a fill in JPJ,
with opportunities to play with different players, learn other songs and
travel to new cities (with or without the costume); email me to discuss.